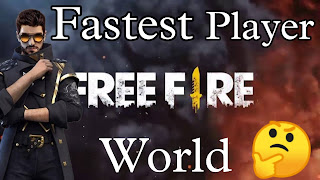 Although there are a lot of players in Free Fire, today we will talk about those 7 players who are called the fastest players in the world. All the players mentioned by us are mobile and pc players. Free Fire is a fast paced game in which skill, movement as well as being fast are also a sign of a good player. Now a lot of new players have come all over the world, whose movement skills are very good.

Vincenzo comes at number 7 in our list. Vincenzo is a professional free fire gamer whose real name is Muhammad Farukh. Vincenzo was born on 24 January 1996 in Tirana (Albania). Vincenzo is 25 years old and plays for the Middle East Servers. Vincenzo is known for its excellent game play and fast skills. Vincenzo’s Free Fire id is 437144862 and his in-game name is Vincenzo. Vincenzo is also called God of Free Fire for his great game play. Vincenzo’s gameplay is very fast and his headshot kill art is also unique. Vincenzo’s YouTube channel has 6.75 million subscribers, And he has 47 million views on his Highest Watch video. Vincenzo regularly uploads videos to his YouTube channel and has a huge fan following in the Middle East, India, Pakistan, Bangladesh and Nepal.

B2K aka Born To Kill is a free YouTuber whose real name is Moez Manzoori. B2K is very popular youtuber for its great games. B2K was born in Tunisia in the year 1997, now he is 24 years old. B2K’s free fire id is 320653047 and his in-game name is Born To Kill. B2K’s YouTube channel has 8.5 million subscribers and their total views are more than 550 million. B2K Play Free Fire on iPhone and is also called their AWM king and 1 vs 4 legends. Born To Kill has 4 youtube channels namely Born To Kill, B2K, B2K Highlights and B2K Short. All his channels have a lot of popularity. Born To Kill is his main YouTube channel, on which he is very active. B2K is a master at clutching 1 vs 4 along with his fast game. He has played 1st 1st with a very big YouTuber, in which his performance was very good.

White FF is a professional free fire player and Youtuber from Brazil. whose gameplay is very good, Everyone is crazy about his gameplay. White FF is also called a fast gloowall player in the world. His gloowall making speed is very fast, due to which his fan following is also very high. Whit ff is one of the best players in Brazil, his Accuracy is on point with speed movement. White FF have 2 million subscribers on their YouTube channel, so far they have put 263 videos on their channel. White ff is also called the fastest player as well as the shotgun king.

M8N real name is Almodah and he is a resident of Egypt. M8N is a 19 year old player who has made the whole world crazy with his game. M8N has a big Fan Following from all over the world. He is one of the popular gamer from the middle east and Uploads gameplay videos on YouTube. The Free Fire UID of M8N is 608823917 and his Free Fire Game Name (IGN) is GW M8N. His game play is very fast, his fan following is very high at such an age. There are 6.83 million subscribers on hei’s YouTube channel. M8n has also done 1 vs 1 with big youtubers like Raistar, where his performance was very good. M8n is one of the fastest free fire players in the world. He plays with Meena Server. This guy deserves to be on this list. He plays very fast and his movement speed is also very high, the name of M8N comes in some Top Free Fire Players.

Raistar is a legend of the Indian Free fire gaming Community. Every free fire lover in India knows the raster. Raistar’s real name is Akshay and he was born in Kerala (India). Raster is a 20 year old Free Fire player. Everyone is crazy about his gameplay. Raistar is a big Free Fire youtuber with 6.3 million subscribers on his channel. Raistar is one of the well known Free Fire players in India. Everyone is crazy about his game play and headset skills. He hails from Kerala India, and it was he who brought the trend of one tap shot in India. Raistar is a well known free fire player of India, his fan following is very high. Raistar Free Fire id is 12022250 and In Game Name is ꧁•ᏒคᎥនтαʀ ࿐. Seeing the great gameplay of the raistar, people have sometimes called him a hacker. Raistar is one of the fastest free fire players in the world, he has defeated even the biggest free fire players many times.

W Xing is a professional Free Fire player and gaming YouTuber, whose gameplay is quite spectacular. W Xing is from Indonesia. His gameplay and movement are very fast, his gloowall making speed is among the fastest in the world. W Xing is a very underrated player, his game skills are of a very high level. W Xing is a mobile player who currently plays Free Fire on iPhone, before that he used to play on Redmi device. W Xing considers White FF as his idol and his gameplay is very similar to White FF. W Xing is the Fastest Free Fire Player in the World. A lot of people like his gameplay. W Xing has 600k subscribers on his YouTube channel, so far he has uploaded 122 videos on his YouTube channel. He puts videos of fast movement and tips and tricks on his channel.